JSPS Alumni Association of the Philippines (JAAP) is organizing the 8th lecture of WEBINAR SERIES 2021 “LIVING IN THE NEW NORMAL AND BEYOND” in partnership with Japan Society for the Promotion of Science and Central Luzon State University. 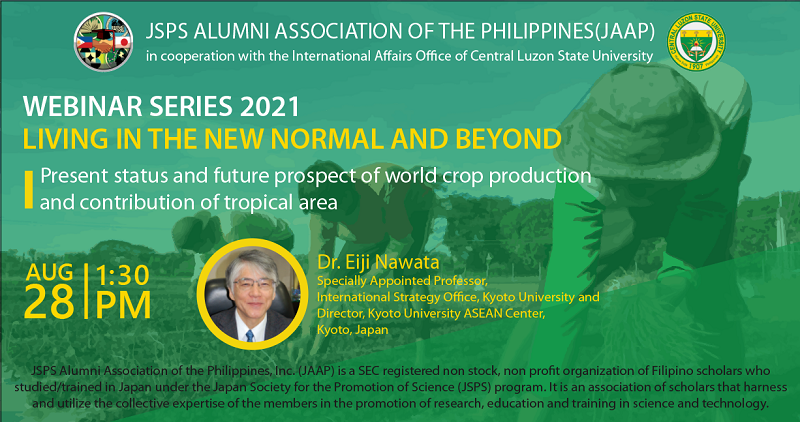 (Abstract of the Lecture)
Now, world production of food, especially of major grain cereals, such as maize, rice and bread wheat, is stable and still increasing. During the period from 2014 to 2016, large scale El Nino phenomenon affected world agriculture and damages to crop production were reported in many places in the world. Nevertheless, world production of 3 major cereals exceeded 2.5 billion ton. This amount could feed about 12 billion people, although we know that there are still relatively large starving populations. In 2017, after the El Nino phenomenon was completed, the world production of major cereals was recorded as 26.7 billion ton. This stable production has been realized, probably due to the development of agricultural technologies, and stabilization of public orders in many areas. In addition, the production in tropical countries, is rapidly increasing. Basically, because of warm climate and affluent sunlight, agricultural potential of the tropics is high and it seems that tropical countries are starting to show their potentials. Then, is it unnecessary to worry about our future food crisis? In this webinar, the present status of world and tropical crop production and contribution of the tropics, including those of Philippines, are analyzed and future prospect is discussed. Additionally, the methods to estimate crop productivity at regional scale are introduced.