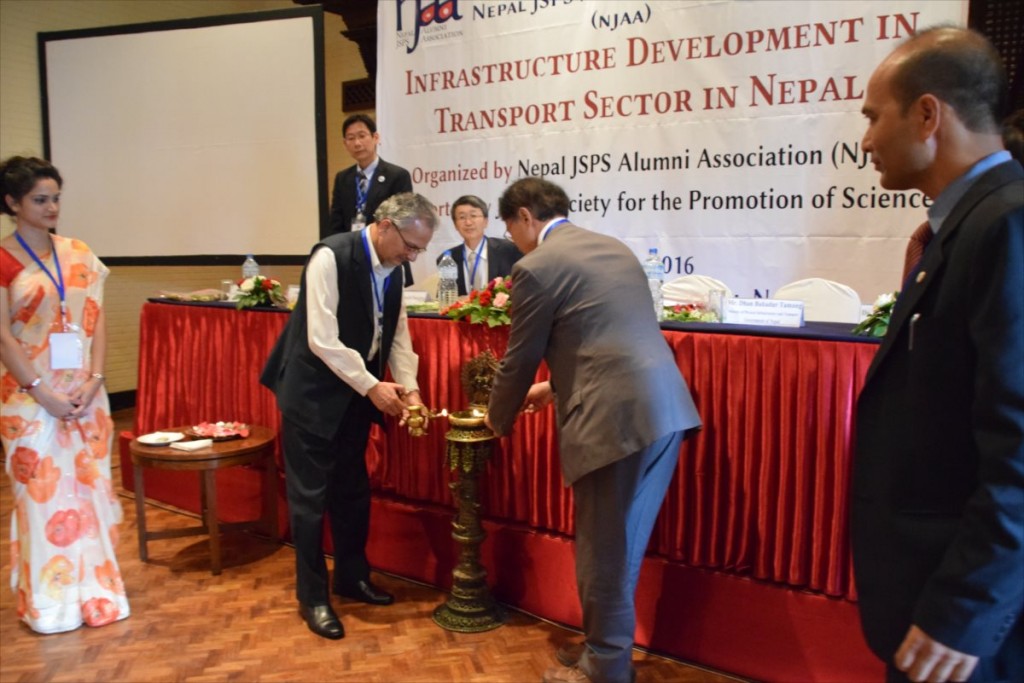 Mr. Kato delivered an address, referring to the huge earthquake which happened in Nepal in April of 2015 and that this year is 60th anniversary of diplomatic relation between Japan and Nepal. In addition, Hon. Dr. Baburam mentioned that Japan, which is one of economically advanced countries, was working on several kinds of issues in the field of natural disaster, and that Japanese experience and technique could be applied to Nepal. He added that education and research were also very important in this regard.
Other guests also expressed their opinion about importance of transport sector and infrastructure development in Nepal and collaboration with Japan in this field. 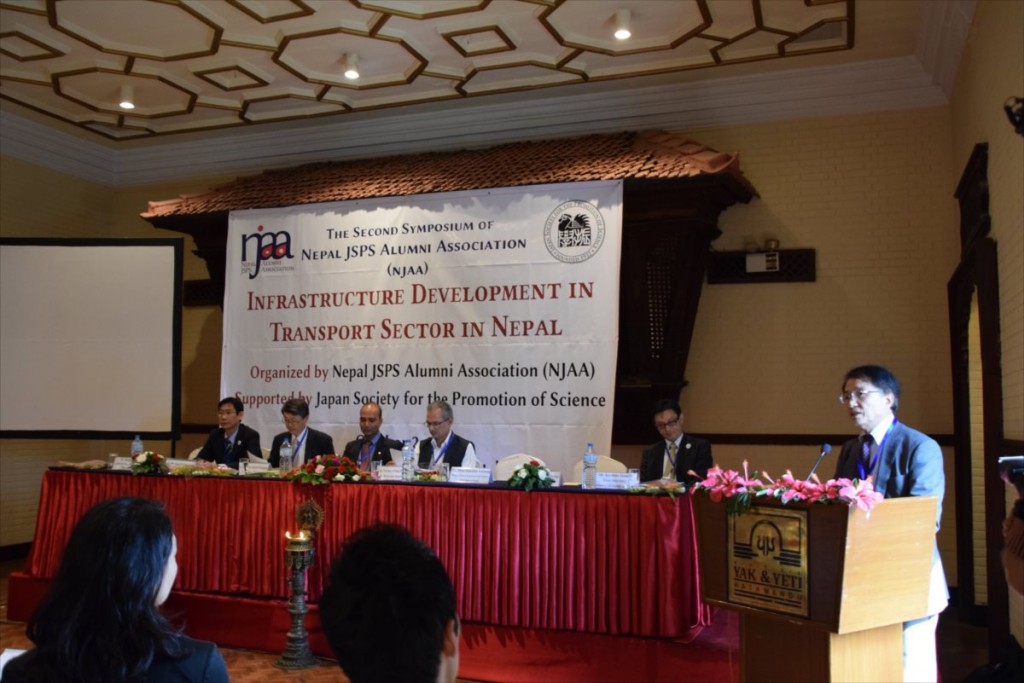 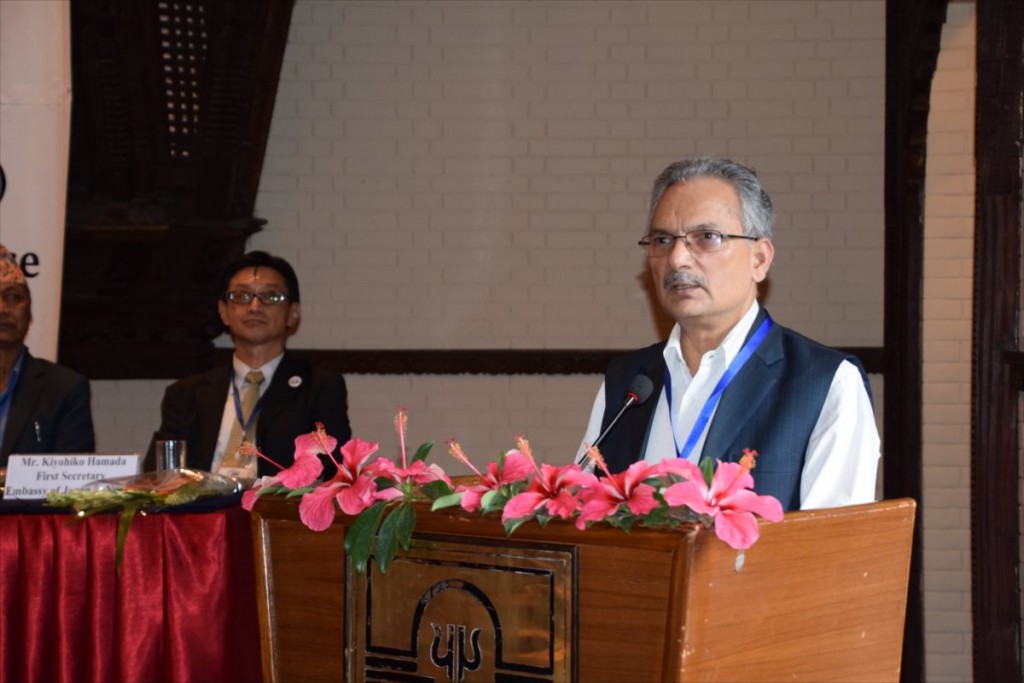 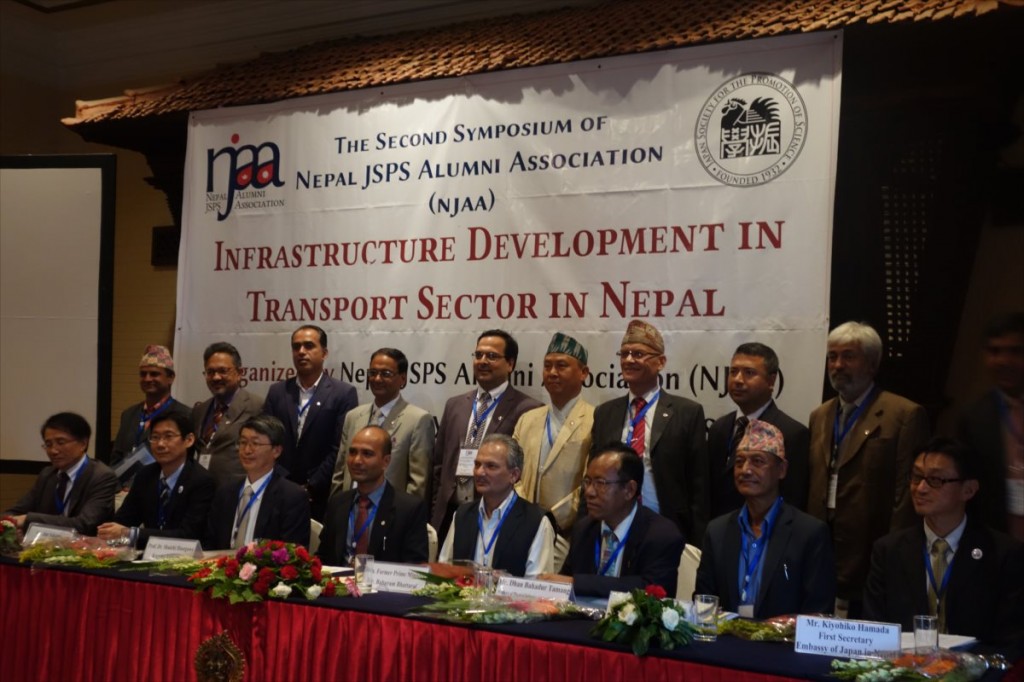 In the Scientific Session, Dr. Ranjan Kumar Dahal, Vice President of NJAA, who got his PhD under supervision of Prof. Dr. Hasegawa, moderated.
First speaker, Prof. Dr. Hasegawa, who has visited Nepal for his research survey more than 20 times in the past, gave a lecture titled “Engineering geological issues in Nepal for infrastructure development” in terms of unique geology in Nepal. He introduced the geological common points between Himalaya and Japan, especially Shikoku, Japanese technique in tunneling and highway construction and a case of tunneling construction in Japan that had had some troubles because of high-pressure water flow. He also pointed out the problems in tunneling and highway development in Nepal and make a suggestion to solve them. 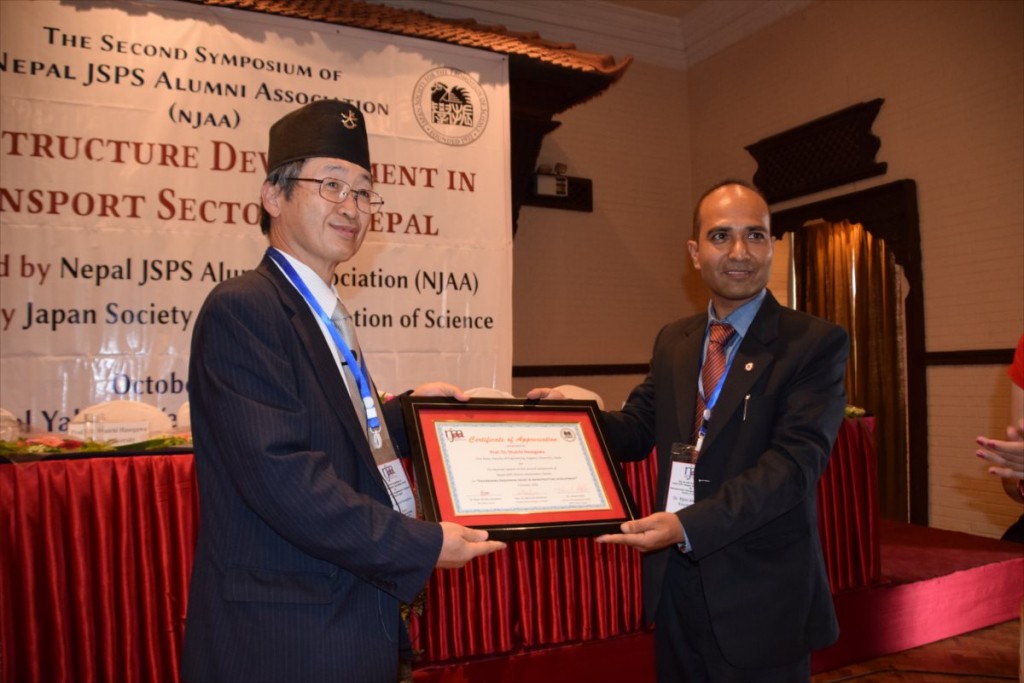 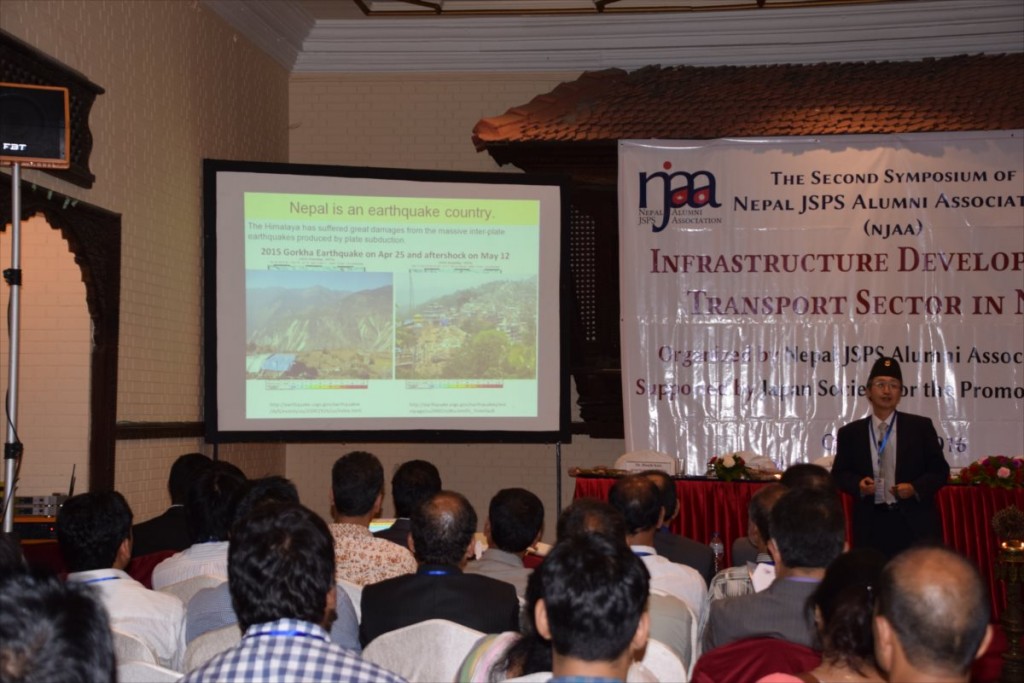 The second speaker, Mr. Sourab Rana, Associate Program Manager, JICA Nepal Office spoke on the themed “JICA’s Cooperation for Transport Infrastructure Development in Nepal”, in which he introduced past and future activities of JICA, followed by the third speaker, Dr. Sandip Shah, the President of Nepal Tunneling Association, spoke on themed “Tunneling in Nepal: challenges and prospects”. 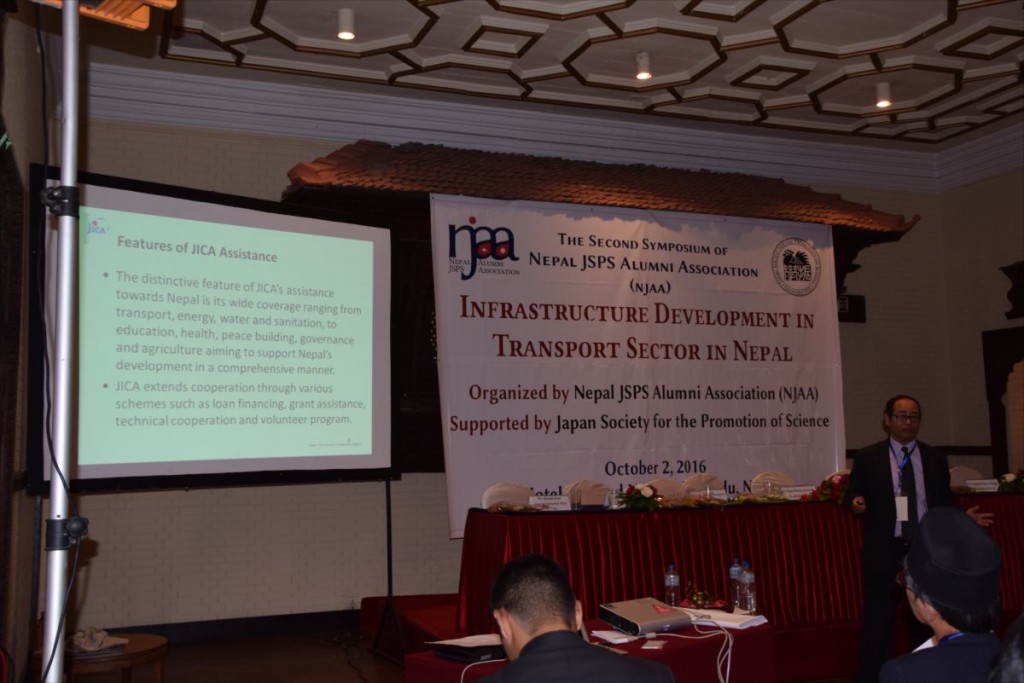 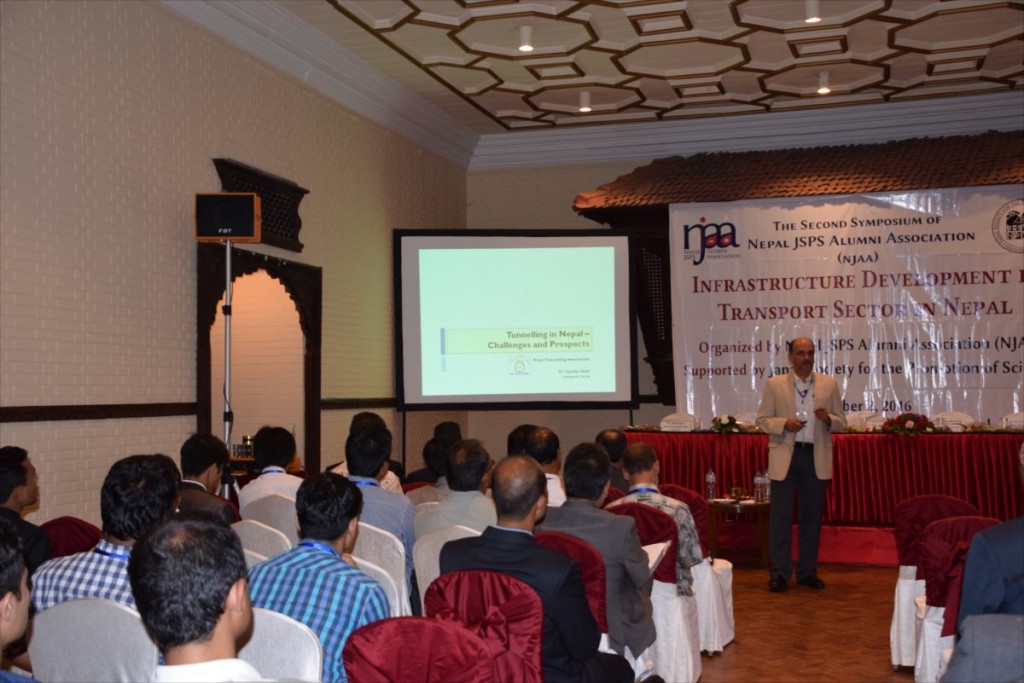 And then, the last speaker, Prof. Kuniaki Yamashita, Director of JSPS Bangkok Office introduced the overview of JSPS and JSPS international programs. 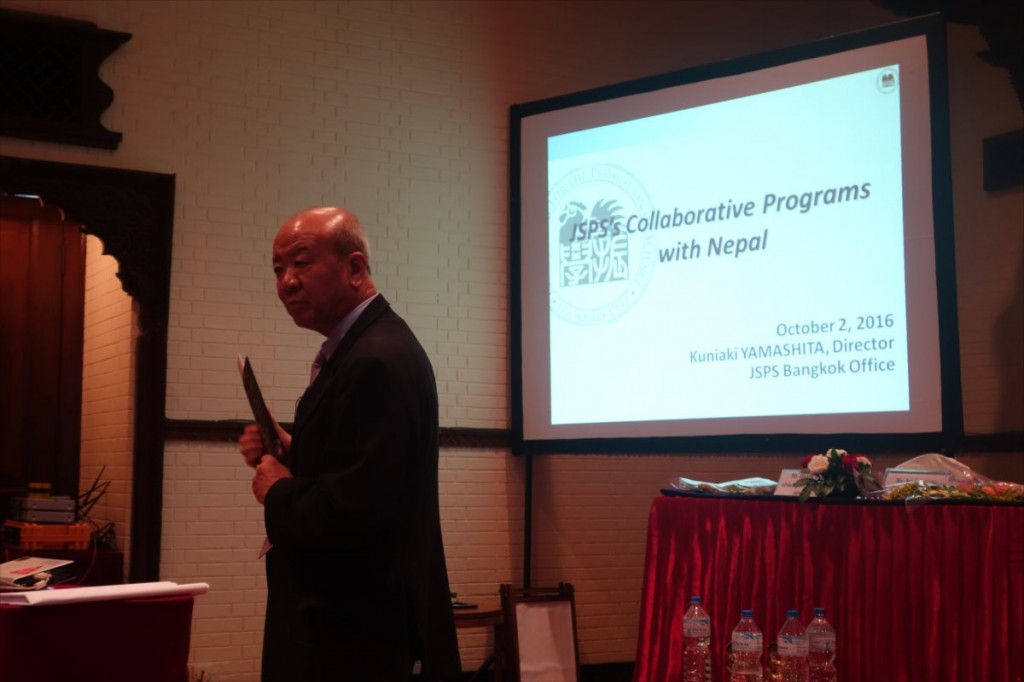 In addition, panel discussion was followed and attended by all speakers and Mr. Saroj Pradhan, Deputy Director General, Department of Road, Government of Nepal, and participants asked a wide range of questions to them. 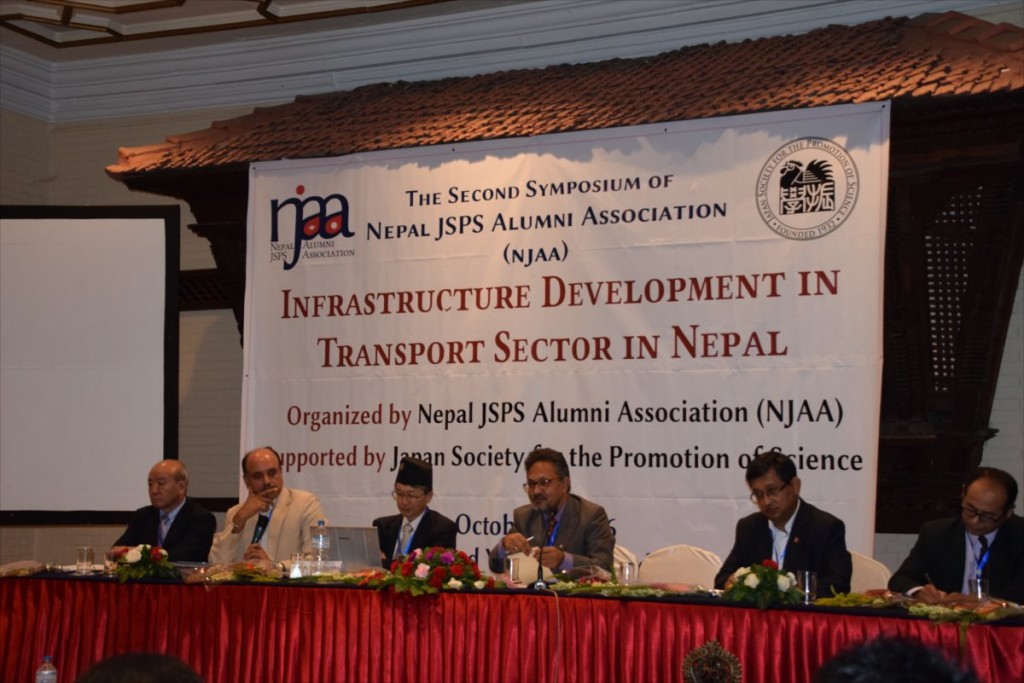 The symposium concluded in being vigorous, with more than 80 participants including graduate students and young researchers. Moreover, young researchers who wish to study in Japan asked a lot of questions during the reception as well, and we could interact with Nepalese researchers. 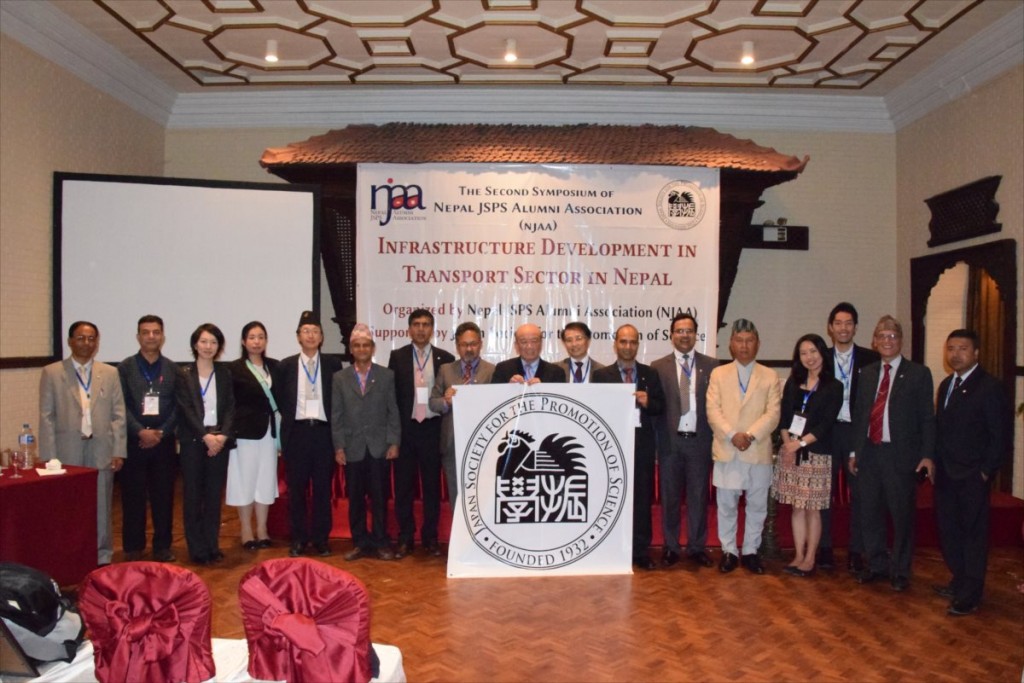 Also, before the symposium we visited NAST with Mr. Kato and discussed future collaboration with JSPS, which has not yet concluded MoU with any agency in Nepal. JSPS side explained its international programs including bilateral program and programs for Nepalese young researchers, and Prof. Yamashita introduced collaboration between other JSPS alumni and its counterpart agency. 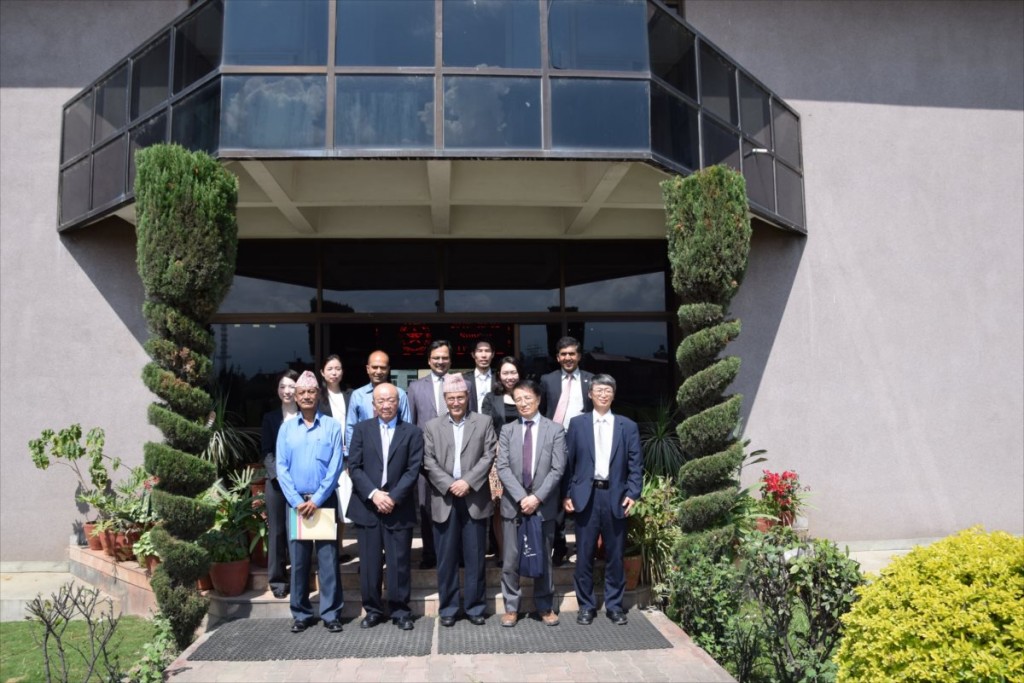