On 21 January, 2016, Nepal JSPS Alumni Association (NJAA) convened the launching ceremony and the 1st scientific symposium under the title “Towards Sustainable and Resilient Development in Nepal” at Hotel Himalaya, Latipur City, Nepal. 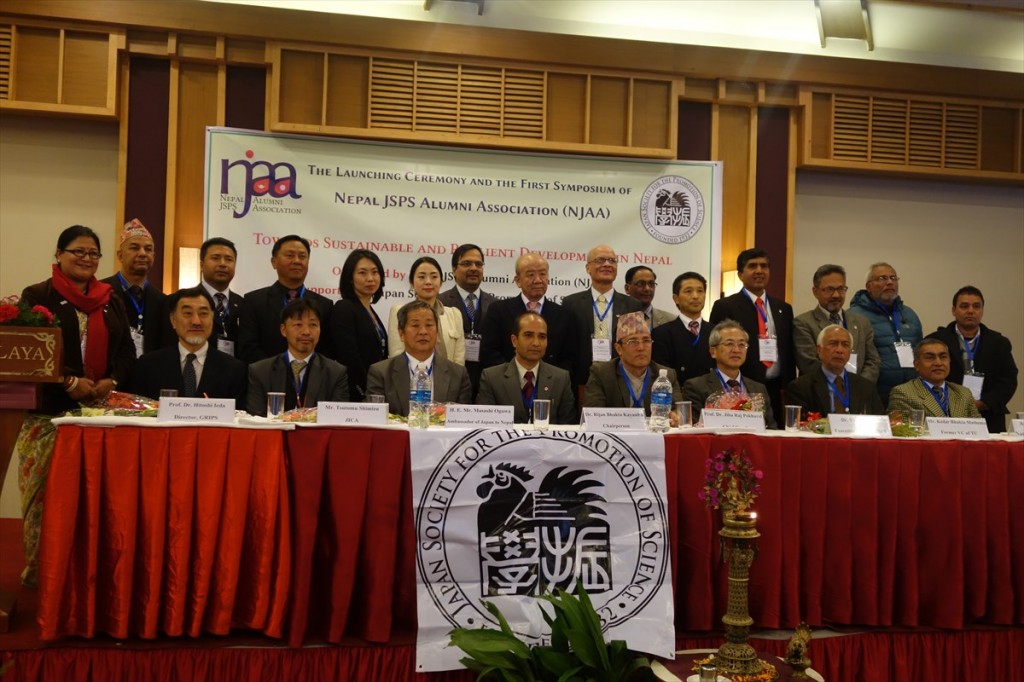 NJAA held its 1st preparatory meeting and established the taskforce for the launch of the alumni association on 7 February, 2014. Since then, it held meeting every months to prepare the constitution, activity plan and organization of the executive committee. It was registered in the district office of Lalitpur, Government of Nepal in December 2014. In February 2015, Prof. Yamashita, Director of JSPS Bangkok Office and Mr. Yamada, the former Deputy Director visited Nepal in order to prepare to formally launch the Nepal alumni association.
February 2015 JSPS Bangkok Office members visited Kathmandu, Nepal to discuss launching Nepal JSPS Alumni Association (NJAA)

In spite of concerns that the launch might be postponed because of the Nepal Earthquake occurred in April 2015, NJAA was officially launched as the 15th official JSPS alumni association with great enthusiasm and effort of NJAA members. 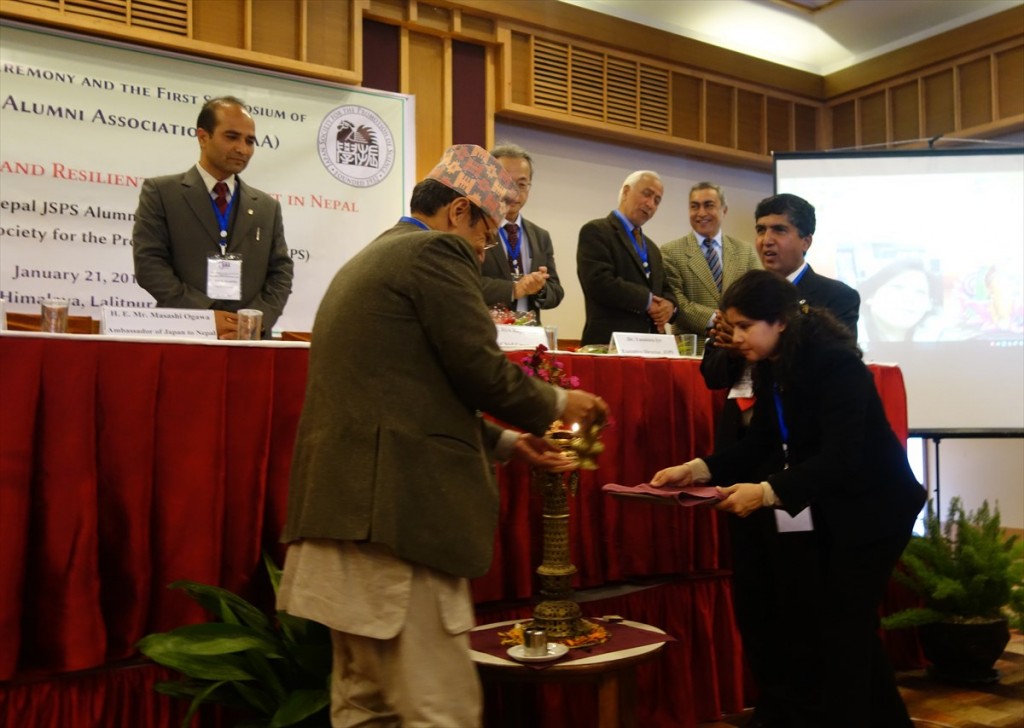 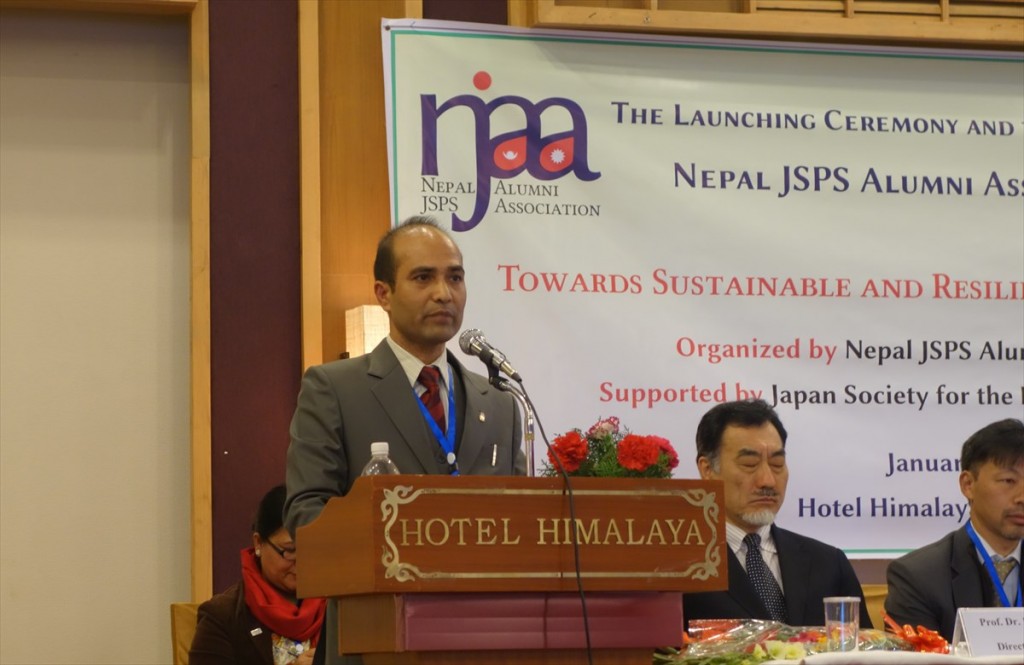 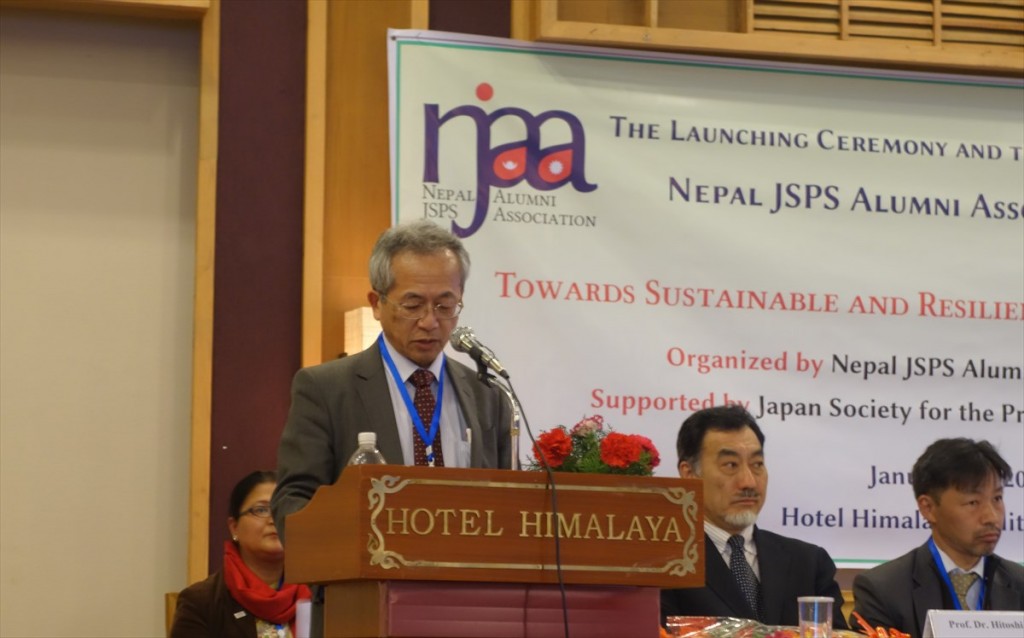 The first keynote lecture was delivered by Prof. Hitoshi Ieda, Director of Infrastructure Policy Program, National Graduate Institute for Policy Studies (GRIPS) under the title of “Evolution of Infrastructure and Social Systems Pushed Forward by Great Natural Disasters.” Prof. Ieda conducts research on international comparison of regional and infrastructure policies on mega-scale national disaster at GRIPS and Graduate School of Engineering, University of Tokyo. Prof. Ieda explained that human actions against natural disaster varied depending on the level of disaster and introduced epoch-making great natural disasters in modern age in Japan. He stated that natural disaster is tragic, however, considering legislative development in the history of disasters, it also could be strong driving force of evolution. 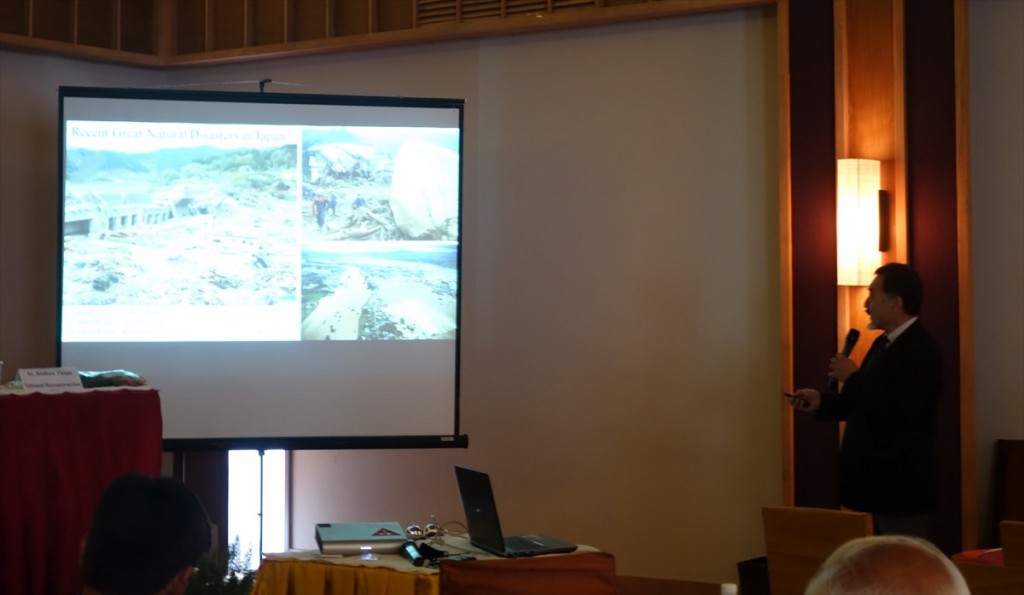 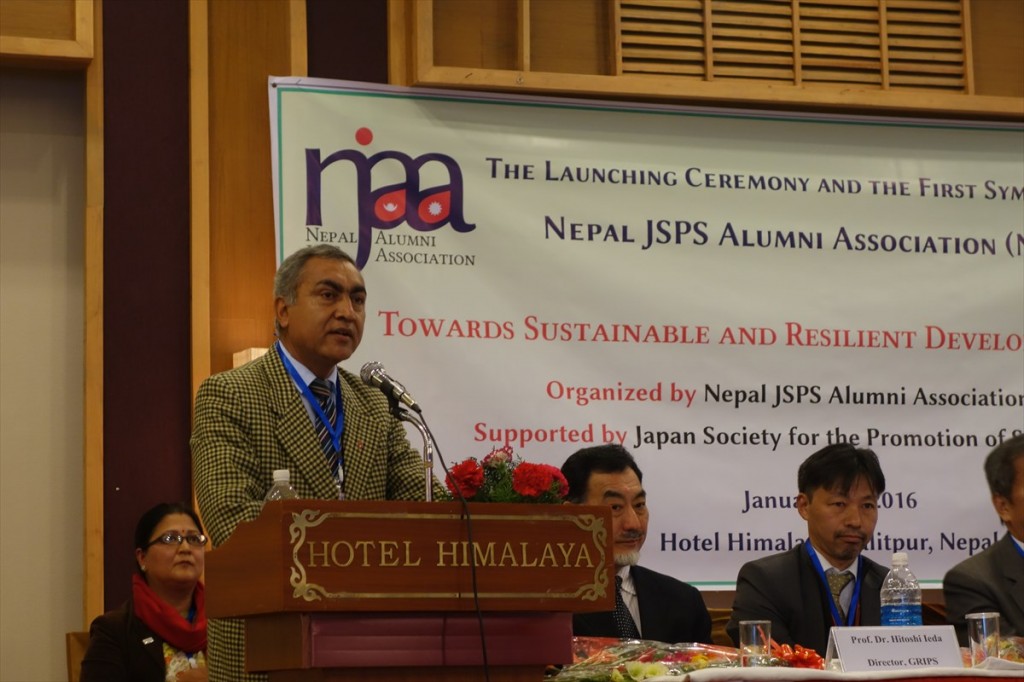 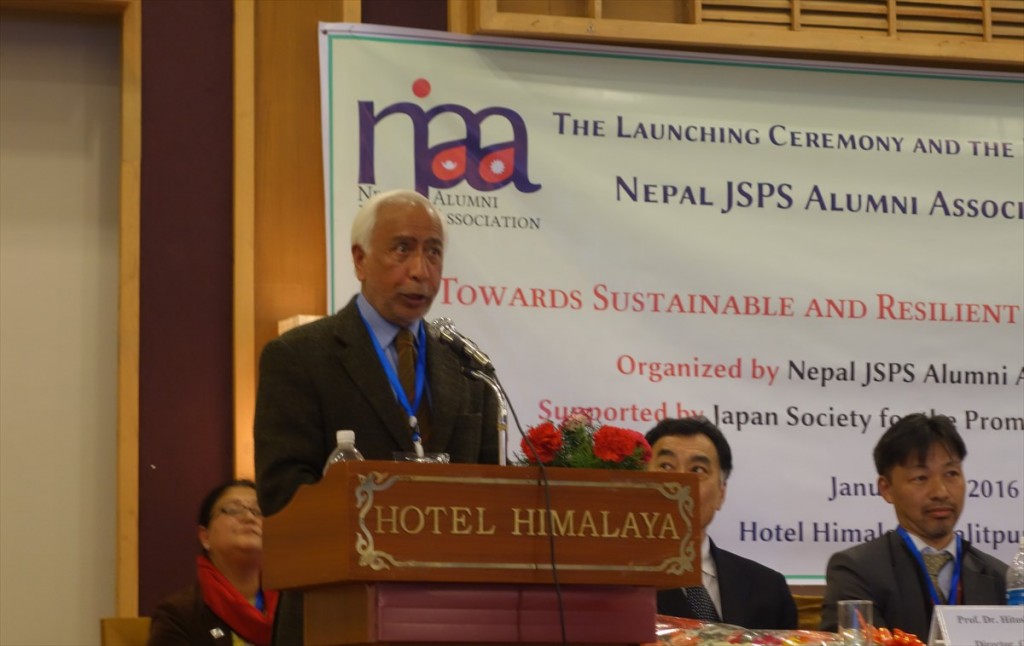 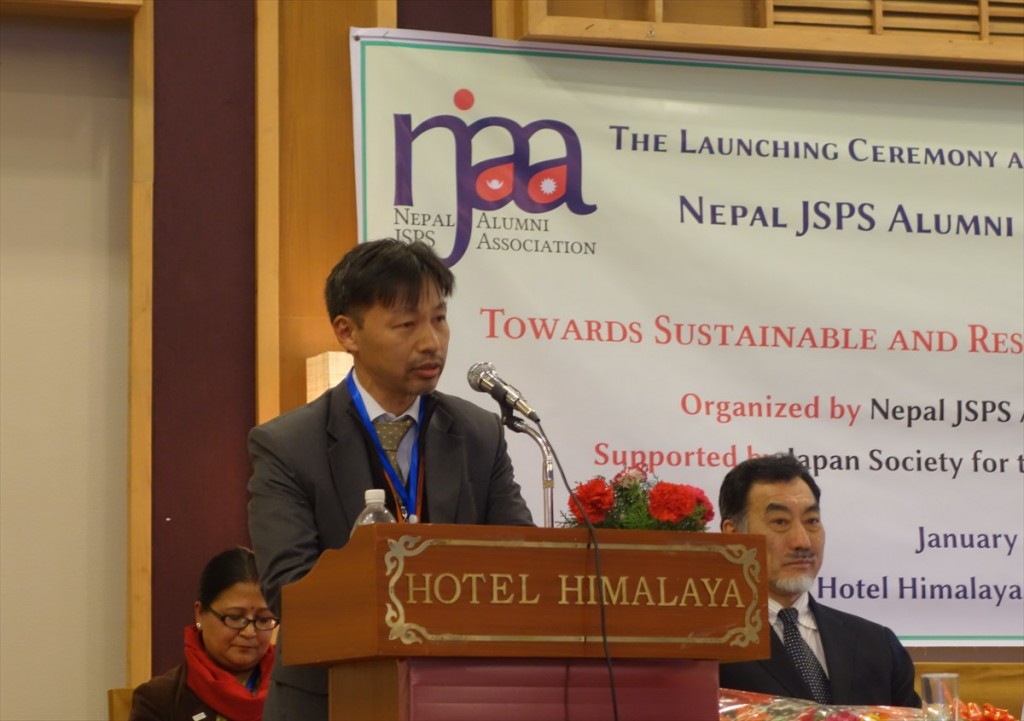 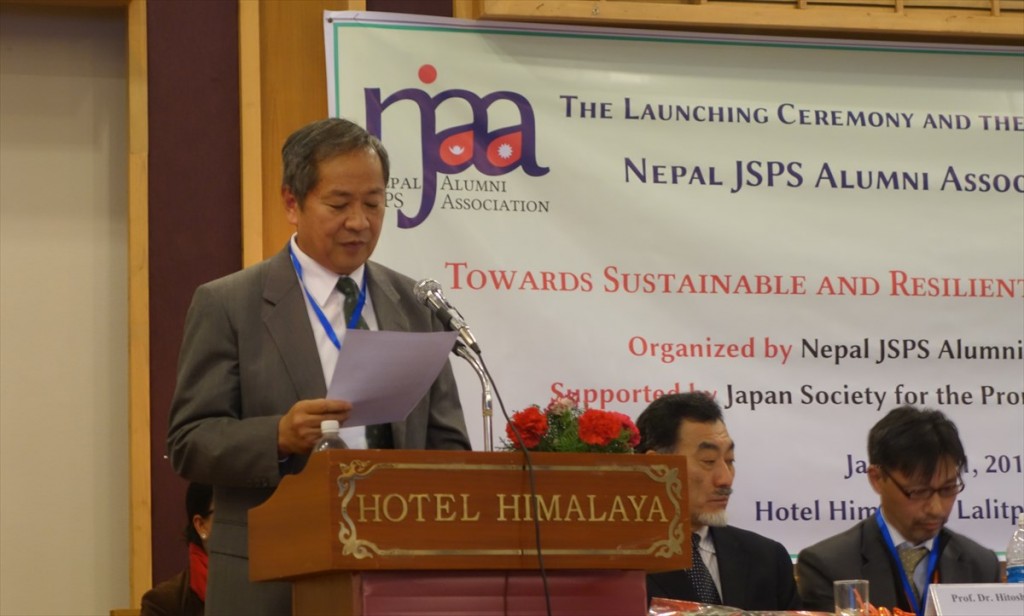 At the end of the launching ceremony, vote of thanks was proposed by Dr. Kundan Lal Shrestha, the secretary of NJAA and approved. 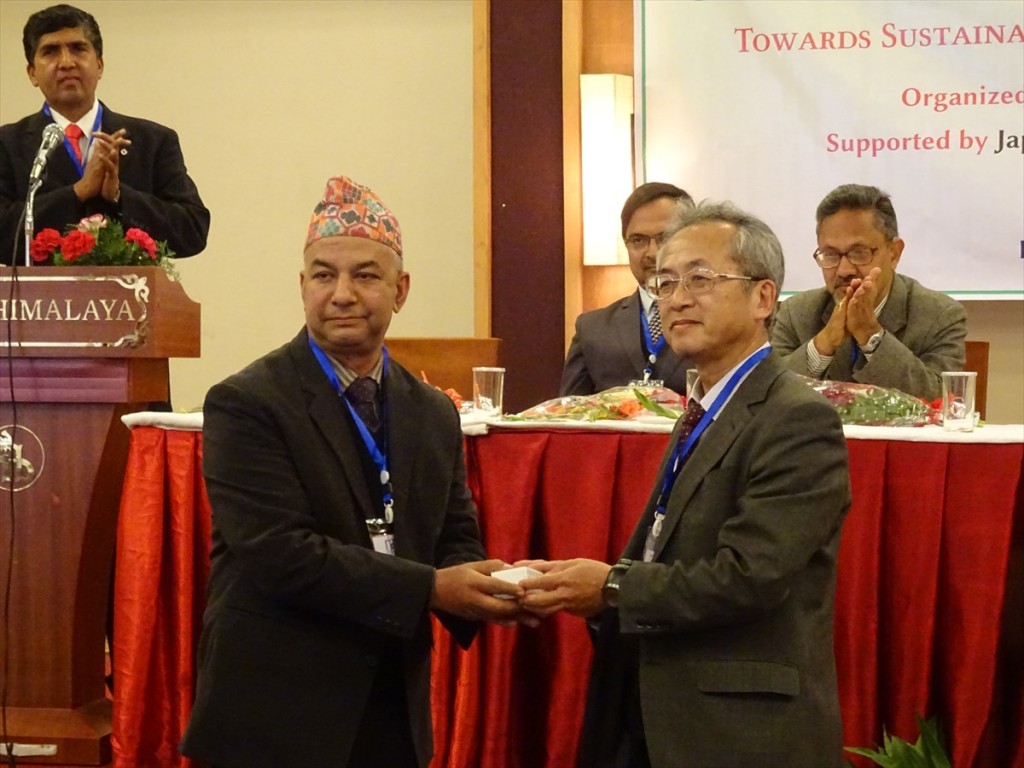 Following was the 1st scientific symposium under the title of “Towards Sustainable and Resilient Development in Nepal,” in which three speakers delivered presentation from their own expert perspective on one common theme, “disaster and reconstruction”. Dr. Kishore Thapa delivered the first presentation under the title “Reconstructions Strategy for Rural and Urban Housing”, followed by Dr. Surya Raj Acharya, NJAA executive member and president of Institute for Development and Policy Studies and Dr. Ranjan Kumar Dahal, NJAA vice president and Associate professor of Geodisaster Research Center (GdRC), Tribhuvan University. In Q&A session, many questions from various research perspectives were raised. 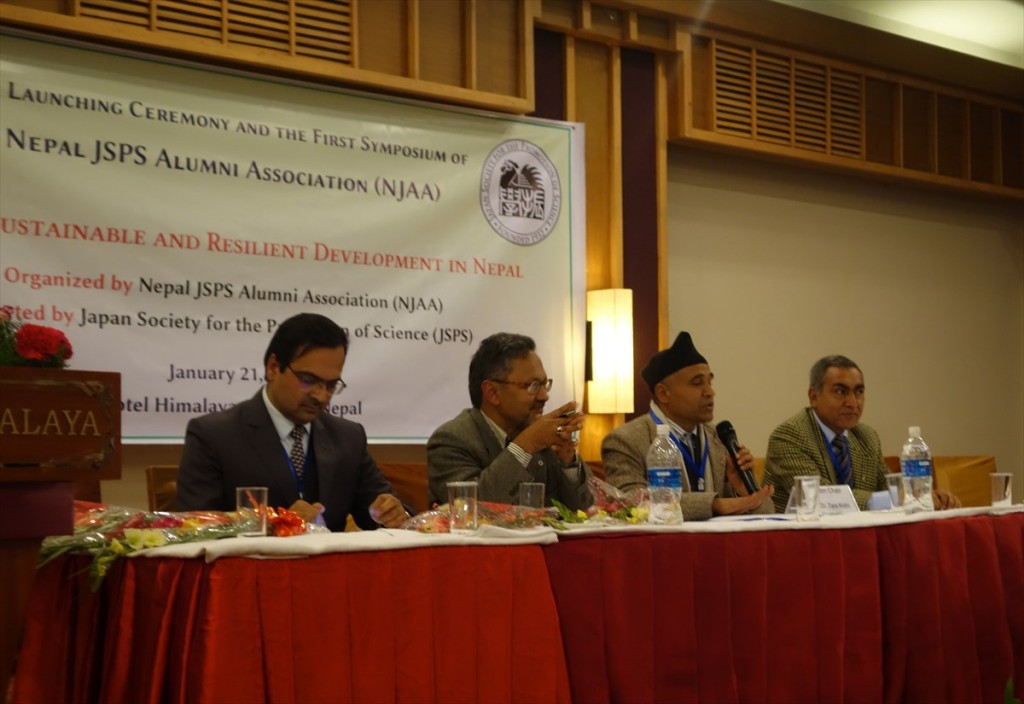 The last program was the presentation on the outline of JSPS and its international programs by Prof. Yamashita, Director of JSPS Bangkok Office. Programs such as Postdoctoral Fellowship program, Invitation Fellowship programs and RONPAKU program especially called much attention of young researchers and many questions were raised throughout the symposium and the reception. 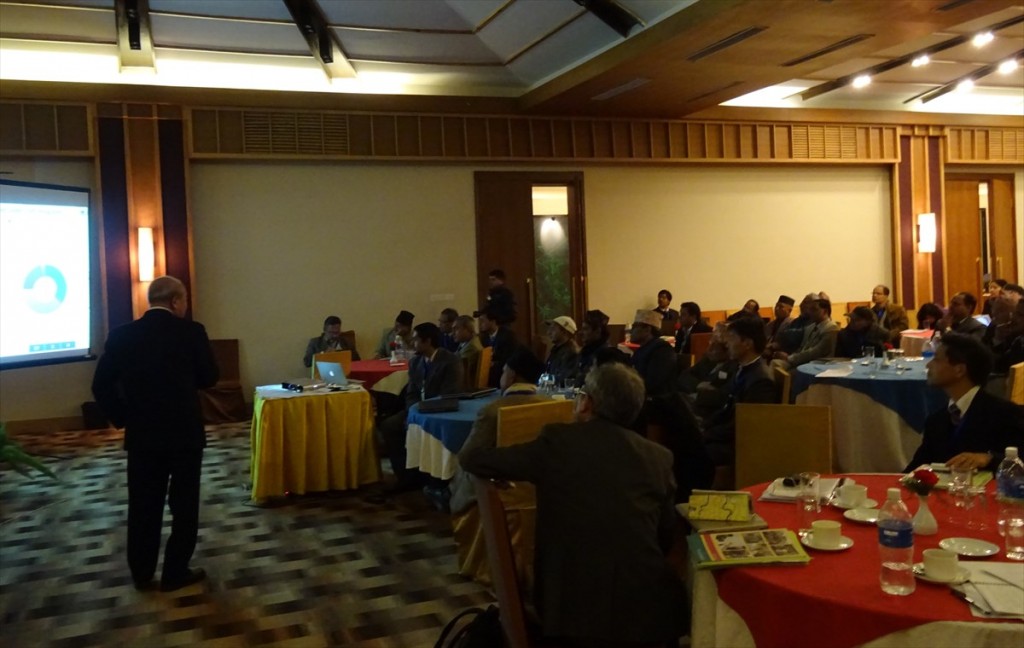