Call for Nominations for the 2017 (33rd) International Prize for Biology

The Call for Nominations of 2017 (33rd) International Prize for Biology was opened.

The International Prize for Biology is a commemorative prize to celebrate the sixty-year reign of Emperor Showa and his longtime devotion to biological research. It also pays tribute to the present Emperor, His Majesty, Emperor Akihito, who has striven for many years to advance the study of gobioid fish taxonomy while contributing continuously to the developing of this Prize.

Based on nominations gathered from around the world, the Prize is awarded annually to a researcher who has made an outstanding contribution to make advance in biological sciences.

The research field of this year’s Prize is “Marine Biology.” In this field of Biology, we would like to invite you to nominate a candidate for the 2017 Prize by filling out the Nomination Form, to be accompanied with a brief statement of the nominee’s achievements.

Please find the Nomination Form and the details about the Prize on our website: http://www.jsps.go.jp/english/e-biol

Thanking you for your kind cooperation and we look forward to receiving an excellent nomination from you.

Heisuke Hironaka
Chair, Committee on the International Prize for Biology

Contact:
Secretariat of the International Prize for Biology
Japan Society for the Promotion of Science
Email: ip-biology@jsps.go.jp

*JSPS Bangkok Office do not accept any questions on this matter. 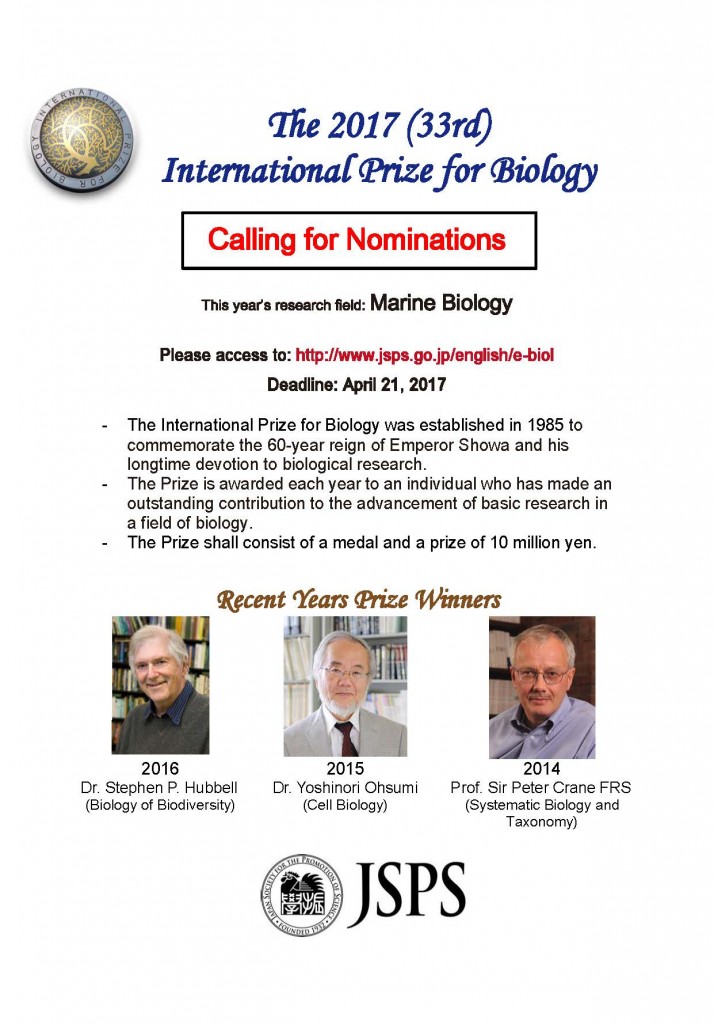